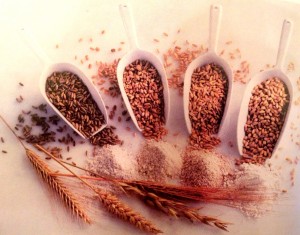 Flour-All we need to know

Cereals and grains offer flour in many varieties and types for different applications in cooking or baking.

Durum flour: Due to the high content of gluten and protein, this type of flour lends a particularly elastic dough and is produced from hard wheat varieties. Hard wheat varieties produce better bread flour. In recent years, many companies characterize it as “bread flour” in the standard product. Generally speaking, durum flour can be used for all doughs containing yeast as raising agent.

Soft flour: Soft wheat produces refined, soft flour which raises difficult and is suitable mainly for pastry. Raises with the help of raising agents and is identified by a lack of elasticity and strength that increased gluten content usually gives to the flour.

Flour for all uses: This flour usually comes from soft wheat and its content of gluten and protein is too small. We usually use it mixed with many different components which do not need special raising, as in biscuits and sauces. We can make bread with this flour, but its raising will not be enough, and it is likely going to have a texture of the mud.

Self raising flour: As mentioned, in this type of flour, the appropriate acidic and alcaline components are already added to be raised by itself by adding the liquid. It is mainly used in pastry.

Wholemeal flour: This flour comes from milling the whole grain, after it has been cleaned of foreign bodies.

“White” flour: If we assume that the wholewheat is 100%, then white flour is standardized by the removal of about 25% of the nutrients of wheat, such as bark, semolina etc. The global law provides for “reinforcement” of this type of flour, but does not specify “how exactly” and with “What ingredients”. This results in a range of meals which are designated as follows: 70% flour for pies, 55% flour for pastry etc.

00 Flour: Flour with that standardization is beginning to appear in food stores and comes (almost always) from Italy, where the flour is characterized as 1,0 or 00 based on how much has been ground. The 00 is the most ground flour of the European market. Contrary to the prevailing view, its content of gluten and protein is very high making it suitable for bread.

Flour from chickpeas: It is made by crushing dried chickpeas. The favorite meal of all those who are allergic to gluten and Mediterranean peoples who use it widely. Such flour is also produced from other pulses in all parts of the earth.

Almond Flour: Particularly widespread in the field of pastry. It is made from rubbing almond or other nuts.

Rice flour: It is made from rice and has particularly high content in starch. It can be produced from paddy rice or not. It is used throughout Asia and Latin America for dozens of uses, especially in the production of noodles and dozens of pastries.

Soy Flour: The favorite meal of vegetarian. It is produced from roasted soy beans and there are varieties with full or reduced fat.

Corn flour: From dried corn. The basic flour of Latin America and later of Africa. You can find it in dozens of different formats for each use. It is widely used in the production of baby food due to its limited presence of gluten. You might find a yellow or white form.

Quinoa flour:  “The mother of all seeds” according to the Incas, the quinoa plant gives its seeds for the flour to be produced and nourish millions of Latin Americans who live in the Andes highlands. Its nutritional value is very high and for this reason in recent years, quinoa is sought after around the world.

Oats: One of the most popular cereals. This flour is used as a substitute for wheat. The discovery a few years ago that its use reduces “bad” cholesterol made it popular.

Barley: The flour made from barley has very high nutritional value and is used for thousands of years as a substitute for wheat.

Buckwheat: Though the seeds of buckwheat strongly reminiscent of grain, it is a plant related to rhubarb–in other words, is the seed of a fruit. For hundreds of years, was used for bread production in northern European countries.

Potato flour: This flour is produced from dried potato and has mainly industrial use.